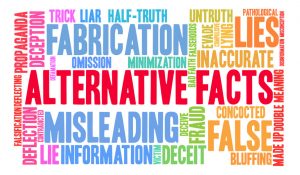 It’s that time when publishers of English dictionaries name their Words of the Year, acknowledging the words or expressions that have generated a lot of interest over the last 12 months. As the Oxford Dictionaries says, “we turn to language to help us mark where we have been, how far we have come, and where we are heading.”

Here are the awards for this year:

Fake news: The editors at Collins thought the past year has “been so unbelievable it’s hard to know what is fact and what is fiction.” That lead the editors to name “fake news” as this year’s word of the year, noting that the use of the term jumped 365% since 2016. The term is defined as “false, often sensational, information disseminated under the guise of news reporting.” In 2016, Collins gave the award to the word Brexit.

Complicit: Dictionary.com named “complicit” as this year’s most significant word. The term means “choosing to be involved in an illegal or questionable act, especially with others; having partnership or involvement in wrongdoing.” The dictionary’s editors noted that the word has sprung up in conversations this year about “those who speak out against powerful figures and institutions and about those who stay silent.” In 2016, Dictionary.com gave the nod to the word “xenophobia.”

Feminism: Merriam-Webster found that lookups for the word “feminism” jumped this year. Other finalists were “complicit,” “recuse,” “empathy,” “dotard,” “syzygy” (having to do with the solar eclipse), “gyro,” “federalism,” “hurricane” and “gaffe.” Last year their choice was (and I’m quoting here) “fuuuuuuuuuuuuck.”

Populism: Cambridge Dictionary defines populism as “political ideas and activities that are intended to get the support of ordinary people by giving them what they want.” The editors noted that populism “represents a phenomenon that’s both truly local and truly global, as populations and their leaders across the world wrestle with issues of immigration and trade, resurgent nationalism, and economic discontent.” The Cambridge editors named “paranoid” as the 2016 Word of the Year.

Youthquake: Oxford Dictionary (UK) defines this term as “a significant cultural, political, or social change arising from the actions or influence of young people.” “Youthquake” is apparently more popular in the UK than in the U.S. The dictionary’s editors say there was a fivefold increase in the use of the term in 2017 compared to 2016. Last year the Oxford Dictionaries said “post-truth” was the Word of the Year.

The American Dialect Society, which is credited with naming the first Word of the Year in 1991, will announce its choice in 2018. Last year the society recognized the term “dumpster fire.”