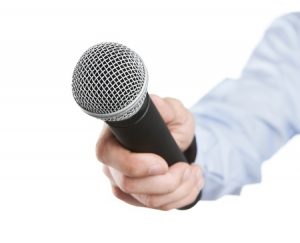 I previously discussed ways of handling speculative, leading, loaded and naïve questions. This post will discuss how to deal effectively with these types of questions:

This is the “just between you and me,” “off the record,” or “don’t worry, I won’t quote you” type of question.

Strategy: Remember that everything is on the record. Even if you’re not quoted, what you say could still get into print. (The reporter could quote an “unnamed source” or could find someone else to confirm the same information.) So stay on message and don’t say anything you wouldn’t want others to know.

This puts false information into the question to get you to correct it, possibly divulging sensitive information. “Analysts expect that you’ll be reporting lower earnings this quarter. What are you going to do about that?”

Strategy: Unless you have publicly released the information, do not reveal anything confidential. Instead repeat your key messages. If possible, cite outside sources that could give the reporter a more accurate view of the facts.

This is the “I already have the story. I just need a few more facts or quotes” kind of question. This probably means that the reporter already has a definite slant on the information, and wants you to confirm (or contradict) it.

Strategy: Find out the story angle. Ask the reporters about their other sources. Do not give any more information than absolutely needed.

You know the scene. The interview is over. The laptop is closed. And then the reporter asks “just one more question.”

Strategy: The temptation is to think your answer won’t matter. Like everything else, it will be on the record. So stick to your main points.

Although not a question, silence is designed to encourage you to talk and perhaps reveal something you shouldn’t.

Strategy: Whoever breaks the silence loses, so don’t say anything until someone else speaks. I know how effective this technique can be. Years ago, I was in a most unpleasant meeting where, after a series of accusations, the room became silent. No one spoke for what seemed like an eternity. Finally the other side broke the silence and ended up weaker for it.

By following these guidelines, you’ll be able to handle even the trickiest media-interview situation. What techniques for media interviews do you use?