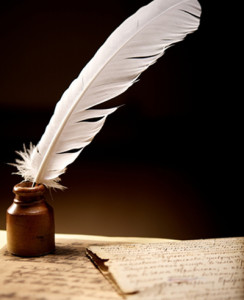 One of my favorite contests is the tongue-in-cheek Bulwer-Lytton Fiction Contest, which challenges entrants to compose the opening sentence to the worst of all possible novels. Bulwer-Lytton, a minor Victorian novelist, is credited with popularizing the famous line “it was a dark and stormy night” that the cartoon beagle Snoopy loved so much.

The English Department at San Jose State University has been organizing the whimsical contest since 1982. The 2014 grand prize winner was: “When the dead moose floated into view the famished crew cheered – this had to mean land! – but Captain Walgrove, flinty-eyed and clear headed thanks to the starvation cleanse in progress, gave fateful orders to remain on the original course and await the appearance of a second and confirming moose.” Elizabeth (Betsy) Dorfman, Bainbridge Island, Washington

There are prizes in other categories as well. Here are some of my favorites.

The Grand Panjandrum’s Special Award went to Stan Hunter Kranc (State College, Pennsylvania) for this entry: “As he girded himself against the noxious, sulfurous fumes that belched from the chasm in preparation for descent into the bowels of the mountain where mighty pressure and unimaginable heat made rock run in syrupy rivers, Bob paused to consider the unlikely series of events that had led him to become the Great God Vulcan’s proctologist.”

The winner for children’s literature was: “Justin was happy, like a clam at high tide, but abruptly ending his musings he recalled that he had every reason to be happy (in his own small way) because he was a quaho and it was the highest of tides, and he squirted with delight.” Mike Mayfield, Austin, Texas

Kevin Hogg of Cranbrook, BC, Canada, was a runner-up in the fantasy category for this sentence: “After years of Dame Gothel’s tyrrany, Rapunzel was only seconds from freedom, until, with an agonized scream, the prince plunged to his death in the thorns below, grasping a handful of detached blond strands–the golden stair having been irreparably weakened by the deficiency of vitamins B3, B6, and B7 in his love’s new celiac-friendly diet.”

And why am I telling you this now, when the winners are announced in August?

Simply to encourage you to enter. The official deadline was April 15 (a date, as the website reminds us, that Americans associate with making up bad stories). But the real deadline is June 30, so you have time. “You may inflict your entries either by electronic or surface mail.”

For more details, as well as contest winners from throughout the years, go to www.bulwer-lytton.com.

By the way, in this case, the “www” means “wretched writers welcome.”