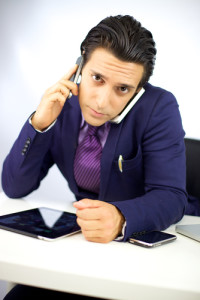 Ever since Deep Throat, people have been fascinated by how the news media get information.

Although you probably won’t be involved in toppling a president, you might have reason to consider whether you should say “no comment,” speak “off the record,” or offer some material exclusively.

Unfortunately, these definitions are often misunderstood, both by the interviewee and the interviewer. For that reason, it’s a good idea to discuss the meaning of the term with the reporter before you provide any information.

As the online encyclopedia Wikipedia notes: “Politicians, rock stars, royalty and other celebrities seem to favor the no-comment line of defense.”

For the rest of us, however, the term makes little or no sense. Studies show that people think you’re guilty if you even say “no comment.”

That doesn’t mean you have to answer every question. You can just state that you cannot discuss a particular topic. Just avoid the words “no comment,” which for many people, imply guilt.

When you speak “on the record,” everything you say can be reproduced verbatim and attributed to you, without further approval from you. Most media interviews are on the record.

“Off the record” means you are speaking not for publication or attribution. Many people think that “off-the-record” comments will never find their way into print. However, the term just means that the information will not be attributed to you. The reporter could still attribute the information to “an anonymous source” or could track down someone else who will confirm the information and be quoted.

Also, just saying something is “off the record” (or “not for attribution” or “on background”) is insufficient. The reporter must agree to keep the comments confidential.

I would never advise a client to go “off the record” unless we had a good relationship with the reporter and knew that he or she was trustworthy. In general, it’s good to keep everything “on the record.”

Speaking “not for attribution” is just a variation of “off the record” and, again, requires the reporter’s agreement to be effective.

The term means that the information will not be attributed to you directly. However, you could be described in such a way as to suggest your identity (e.g., “a high-ranking official in the State Department”).

Another variation of the off-the-record theme is to speak “on background.” The Encarta dictionary defines “on background” as speaking “on conditions of anonymity and in an effort to provide the press with non-attributable information, usually sensitive in nature, which addresses the issue on background only.”

If you speak “on deep background,” the reporter should not attribute the material to any source.

Both “on background” and “on deep background” are mainly used for explanatory discussions and investigative reporting. However, if the reporter can get the same information from an alternate source, that material may be used.

And, again, the reporter must agree to the terms in advance.

When dealing with unannounced products or initiatives, you can ask the reporters to sign a nondisclosure agreement (NDA), which is a formalized version of an embargo.

The reporter must sign the agreement for it to be effective.

Until this point, all the confidentiality issues we’ve discussed bind the editor. Exclusives and specials bind you.

Exclusives are usually restricted to feature or interview placements. In general, the term means that the article or material will not be given to any other publication or program, or that the spokesperson will not interview with any other outlet. Oftentimes, an exclusive increases the chances a story will be published or aired.

A “special” is just another way of saying an exclusive. The term, which is commonly used for contributed articles, means that the material is tailored for a particular publication. You should not submit that exact material to any other publication or outlet.

Magazines usually insist on specials or exclusives for contributed articles. If a publication requests an exclusive, make sure you understand what the editor or producer means by the term. If the outlet is prestigious enough to request an exclusive, it’s probably important enough for you to give it.

As stated earlier, these terms have slightly different definitions, and misunderstandings are common. Avoid surprises. Confirm the meaning of the term before you providing any information.